The launch date for Royal Enfield’s forthcoming Hunter 350 has been revealed as August 7 in a fresh teaser. The teaser video also exposes the exhaust note for the future model, which is quite similar to that of the Classic and Meteor 350, two of its current J-series motorcycles.

The third Royal Enfield motorcycle with a J-platform engine will be the Hunter 350. The 349cc, air-cooled, single-cylinder engine will likely produce a peak power output of 20.2 horsepower, the same as its siblings, and torque of 27 Nm. It will be considerably lighter than the previous J-series models, setting it apart from them and making it more appealing to a larger audience. Recent spy photos suggest that there will be two variations of the Hunter 350, with the differences including wheel and color options. The Royal Enfield Hunter 350 may end up being the most accessible model in RE’s current lineup based on the basic equipment levels. Prices are anticipated to range between Rs 1.5 lakh and Rs 1.6 lakh, and given that the Bullet will shortly receive an update, the Hunter may rival RE’s venerable icon. 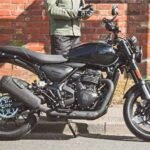