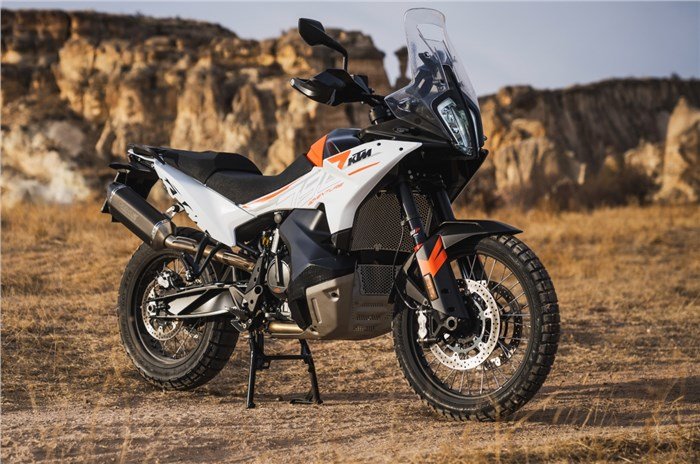 The bodywork on the KTM 790 and 890 adventure has been updated to include a wider front fairing that now connects to the side panels. The models for this year also have two new colorways and a wider front windscreen, which is believed to be inspired by the 450 Rally racer from the Austrian manufacturer. Instead of Continental tires, which were used on the 2023 versions, Pirelli Scorpion Rally STR tires are now standard. While the 790 Adventure only had a preload-adjustable monoshock, the 890 Adventure now boasts fully adjustable WP suspension on both ends. The DEMO mode, which offers the end-user access to the whole suite of electronics for the first 1,500 km before requiring a separate purchase of the optional Rally Mode and bi-directional quickshifter (on the 790 only), is another new feature for this year. KTM has updated the ABS calibration for 2023 in order to better align it with the chosen riding mode. For instance, the rear ABS is now immediately disabled when switching to Off-road or Rally modes. The 5-inch TFT dash on both middleweight adventure bikes controls all electronic rider aids and can be connected to your smartphone for navigation and other alerts. Additionally, KTM has moved the manufacturing of its 790 Adventure to China, where it will be made under KTM personnel’s supervision by CFMoto, the company’s strategic partner.
The likelihood of either of these middleweight adventure bikes entering India is extremely low given that KTM has been absent from the country’s premium bike market for more than two years.

Are you excited about the launch of the 2023 KTM 790 And 890 Adventure? comment down below

Mercedes Benz GLB Launched At A Price Of Rs 63.8 Lakh

Mercedes Benz GLB Launched At A Price Of Rs 63.8 Lakh