Honda has recently been busily growing and diversifying its BigWing network and product line, and there are several launches planned. The Honda CB350 Brigade name was recently trademarked by the manufacturer in India. It’s too soon to speculate on what it might indicate, but another H’Ness CB350 variation might be in the works.

Another possibility is that the CB350 Brigade is a limited-edition bike that will compete with the Royal Enfield Classic 350 Signals. I’ll say it again: The Signals is Royal Enfield’s homage to the wartime motorcycles utilized by the British armed forces. 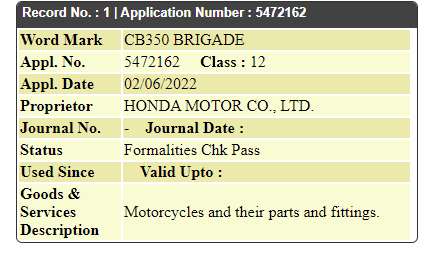 In comparison to the H’ness CB350 and the CB350RS, the CB350 Brigade will likely include unique paint jobs and other cosmetic alterations. The 348.36cc, air-cooled, single-cylinder engine should have the same chassis, brakes, suspension, and 30Nm at 3,000 rpm, though.

Additionally, since the Honda CB350 Brigade was only trademarked on June 2, the motorcycle’s release is still a ways off.