Finally, Triumph Motorcycles have announced that the production version of the next trident mid-capacity would be unveiled on 30 October. This will be the most affordable Triumph model set under the Street Twin. The 2020 Triumph Trident development version was tested ‘spotted.’

The 660cc, inline-three cylinder engine will be the Triumph Trident that generates 95bhp and a peak torque of 66Nm. In India, the Trident will compete against the Kawasaki Z650 and the Honda CB650R. It is an appealing kit due to its usability.

Rodolfo Frascoli, who had previously collaborated with Triumph, designed Triumph Trident in 2021 for the Triumph Tiger 900. The concept of The Trident is influenced more by Street Triple and Daytona and the classic motorcycles of the brand. In its ‘final testing phases in and around Hinckley UK,’ the Trident says Triumph. The company also posted pictures of its last production stage before its launch. As regards functionalities, a new instrument cluster with a fully digital screen and several menus will be set up by the 2021 Triumph Trident to gain access to the different functions of the bike. The business has already stated that Trident would also have leading class characteristics.

In place of the street triple aluminum assembly, the Triumph Trident will also be coming with new steel construction. This made the bike more affordable. Other parts such as suspension, brakes, and pneumatics were also exchanged. Triumph believes however that high-quality, truly branded parts have been assured. 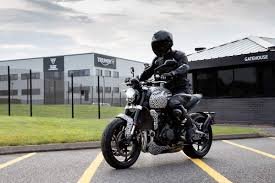 The 2020 Triumph Trident is not only a tough kit but can also build its business niche. The external shape of the bike and the location of the pegs are clear. This is a comfortable and upright riding stance rather than other Triumph bikes. This makes the Trident perfect for tracks and a regular touring machine.

The 2021 Triumph Trident is to be assembled in Thailand with a price tag of around Rs 6.5-7 lakh (ex-showroom). We believe the bike will be also available in India.

Are you excited about the 2020 Triumph Trident? Comment down below