When it comes to design, it looks a lot like the 950. The new engine covers and seat can be seen if you look closely. Ducati has also tweaked the ergonomics, resulting in a seat that is both slimmer and more compact while also being more comfortable. Repositioned footpegs, which are somewhat further away from the seat to improve legroom, are among the other adjustments to the ergos. The regular seat is significantly lower than before, making it more accessible.

The 2022 Ducati Multistrada V2 is powered by a widely used 937cc v-twin engine. This engine has new connecting rods and produces 113 horsepower at 9,000 rpm and 96 Newton meters at 7,750 rpm. A new eight-disc hydraulic clutch and a reworked gearbox are also included in the Multistrada V2. A typical feature on the V2 S is an up-down quickshifter. 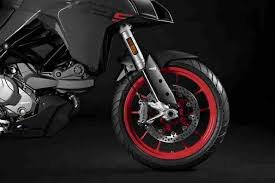 Lighter mirrors and cast wheels from the Multistrada V4 are fitted to the Multistrada V2. This helps to lower the weight by 5kg, resulting in kerb weights of 221.8kg (standard) and 224.9kg (heavy) (S). As an optional extra, Ducati has introduced spoked wheels, which are reported to be lighter than before.

The suspension and brakes have remained unchanged, with the 2022 Ducati Multistrada V2 using the same USD and monoshock units as previously, as well as Brembo monoblock calipers. Cornering ABS, traction control, variable riding modes, and vehicle hold control are also included in both models. Cruise control, a complete LED headlamp with cornering lights, a 5-inch TFT full-color display, and backlit handlebar controls are all included on the V2 S. Given Ducati’s extensive lineup of motorcycles available in India, including the Multistrada V2’s predecessor, it is quite likely that it will be sold here. What will be interesting to observe is how the corporation handles the price. For comparison, the current Multistrada 950 S costs Rs 15.49 lakh. The 2022 Ducati Multistrada V2 S will also see a minor price increase.

Are you excited about the 2022 Ducati Multistrada V2? Comment down below