Maruti Suzuki has approved the Jimny for an India debut, and the facts were shared with dealers at a recent dealer conference. The Jimny has been speculated about debuting in India since it was shown at the 2020 Auto Expo, and as we previously reported, the India-spec Jimny would be a 5-door vehicle. Having said that, Maruti is yet to confirm a definite launch date for the Jimny in India. Dimensionally, the 5-door Jimny is 300mm longer and has a 300mm wider wheelbase than the 3-door Jimny offered internationally. The SUV will feature a length of 3,850mm, a width of 1,645mm, a height of 1,730mm, and a wheelbase of 2,550mm. Notably, the Jimny will be less than 4 metres in length, similar to the Swift, with a somewhat larger wheelbase than the Vitara Brezza. The Jimny will also be the only SUV in this compact SUV class with a true 4×4 system.

The Maruti Suzuki Jimny will be driven by the carmaker’s iconic 1.5-litre K15B petrol engine, which will be paired with Maruti’s 12V SHVS mild-hybrid technology. This engine, which already powers cars such as the Vitara Brezza, Ciaz, Ertiga, and S-Cross, generates 102hp and 138Nm of peak torque. A 5-speed manual transmission and a 4-speed torque converter automatic gearbox are also possibilities. What’s worth noting here is that, although measuring less than 4 metres in length, the Jimny will not fall into the lower excise category in India due to its 1.5-litre petrol engine.

Maruti Suzuki has been domestically manufacturing 3-door left-hand drive Jimnys for export for about a year. However, according to reports, Maruti has recently begun domestic production of 3-door right-hand drive Jimny models for export. As a result, Maruti may introduce a three-door variant of the Jimny in India at a later date. 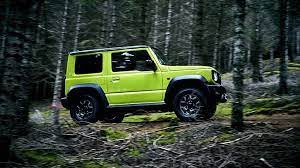 Given that the Maruti Suzuki Jimny will have four-wheel drive, anticipate it to be more expensive than the country’s current crop of compact SUVs. It will undoubtedly be a niche product, and while it has no direct competitors in terms of size, it will very probably encounter competition from the Mahindra Thar and the Force Gurkha.

Are you excited about the Maruti Suzuki Jimny launch is India? Comment down below