FacebookTweetLinkedInPinEmail
Contents hide
1 Audi A4 Facelift Bookings Open At Rs 2 Lakh
2 Are you excited about the bookings of Audi A4? Comment down below
3 Also, see

The Audi A4 facelift is now available for booking on the Audi India website and across the country at carmaker dealerships. The announcement comes just a week after the carmaker began rolling out the locally assembled A4 from its facility in Aurangabad. Buyers can book Audi’s luxury sedan for Rs 2 lakh.

This is the second facelift in India for the A4, with the model having previously received an update in late 2019, which was discontinued earlier in the year with the introduction of the latest emission regulations.

With a wider single-frame grille, updated headlamps with daytime running lamps revamped front and rear bumpers, and redesigned tail-lamps, the forthcoming 2021 model gets some extensive improvements compared to the last facelift.
Inside, though there are a few significant changes, the basic cabin architecture remains unchanged. The facelifted A4 gets a bigger 10.1-inch free-standing touchscreen. However, unlike newer Audi generations such as the A6 and A8, instead of featuring a second monitor, the A4 carries forward physical controls – such as for climate control. 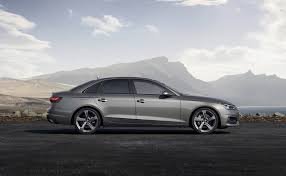 The revised A4 is scheduled to go on sale in a choice of two models, Premium Plus and the fully-loaded technology, according to dealers. Expect the A4 technology to come with technology such as the aforementioned touchscreen, digital instrument cluster ‘Virtual Cockpit’ from Audi, all-LED headlamps, multi-zone climate control, ambient lighting, and more.

Beneath the bonnet is another major change to the A4. Although a 150hp, 1.4-litre turbo-petrol was available for the previous Audi A4, this facelifted car will be offered with a 190hp, 2.0-litre turbo-petrol engine that is more powerful. As standard, the engine will be paired with a 7-speed automatic dual-clutch gearbox, with power sent to the front wheels. No diesel engine option will be available.

Compared to the Mercedes C-class, BMW 3 Series, and the petrol-only Jaguar XE, the facelifted A4 will go up. In March 2021, the car will also face competition from the third-gen Volvo S60. Expect prices to start at Rs 42 lakh in the region of (ex-showroom). 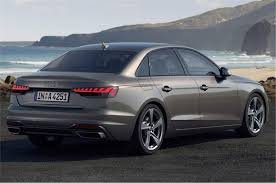 Also, Audi has lined up a host of other product launches for the coming year.

For us, the new Audi A4 will mark the start of a power-packed year and we are sure of attracting buyers in that segment. Balbir Singh Dhillon, Head, Audi India, said that 2021 will see many product releases and we are extremely pleased to kick off the year with a model that has shaped the brand in India.

The carmaker is looking to get its India line-up back to full strength by the end of 2021, as stated by us earlier, with product models such as the A3, Q3, Q5, Q7 expected to return as either facelifts or all-new models. The carmaker currently only has five models, the A6, A8, Q2, Q8, and RS Q8, and the RS7, on sale in the region.

Are you excited about the bookings of Audi A4? Comment down below