Facebook5TweetLinkedInPinEmail
Contents hide
1 BMW CE 04 Electric Scooter Unveiled In India
2 Are you excited about the BMW CE 04? Comment down below
3 Also, see

BMW debuted the CE 04 in India at the same time as the 2023 S 1000 RR. The e-scooter, which has a futuristic appearance, has an 8.9kWh lithium-ion battery that gives it a 130km range on a single charge.

The BMW CE 04 has a lean tail section with a bench-like seat, wide side panels, and a compact front apron. The CE 04 e-scooter from BMW also has storage spaces built into the sides and front of the vehicle. Additionally, there is a Type-C USB charging connector in a ventilated mobile charging compartment.

The CE 04’s 8.9kWh lithium-ion battery, which drives the motor, is located inside the floorboard. According to BMW, the scooter can travel 130km on a single charge. A 2.3kW charger can charge the battery from zero to one hundred percent in 4 hours and 20 minutes. With a 6.9kW fast charger, however, that period is reduced to one hour and forty minutes. 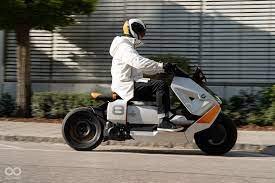 The BMW CE 04 has three standard riding modes: Eco, Road, and Rain. It also has traction control. The enormous 10.25-inch, high-resolution TFT display, which offers complete smartphone connectivity, may be used to access the ride modes. A split function between navigation and other riding features is also available on the dash.

The BMW CE 04 has a single-sided swingarm coupled to a preload-adjustable monoshock that is mounted to a 35mm telescopic fork at the front of a tubular steel frame. The scooter has 15-inch wheels with 120-section and 160-section tyres on the front and back, respectively.

A single disc in the back and two 265mm discs are used for braking. While ABS is a must, BMW also offers ABS Pro, which includes a cornering function, as an option. 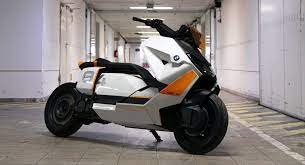 BMW offers the CE 04 electric scooter in two different color schemes throughout the world. The Avant Garde Style trim comes in Magellan Grey metallic, with a black/orange seat and an orange wind deflector, as opposed to the normal one, which is bright white with matte black portions. BMW has not yet disclosed its plans for the CE 04 electric scooter in India, but given the popularity of the C 400 GT maxi scooter, it is extremely likely that the company would do so. Pricing-wise, the CE 04 is about twice as expensive as the C 400 GT in foreign countries. If that pattern holds, it won’t be too much more expensive than an R 1250 GS in India.

Are you excited about the BMW CE 04? Comment down below