FacebookTweetLinkedInPinEmail
Contents hide
1 2022 Polestar 3 EV Teased
2 Are you excited about the launch of the 2022 Polestar 3? Comment down below
3 Also, see

The third Polestar model, a stunning electric SUV with a performance focus, will go into production in the United States next year.

The SUV will be the first Volvo Group car to utilize parent firm Geely’s new SEA architecture and will be known simply as the 3. This follows Polestar’s number naming philosophy.

The 2022 Polestar 3 will be constructed alongside the current S60 and the next-generation XC90 at Volvo’s Ridgehill plant in South Carolina, in accordance with the electric performance brand’s global ambitions.

Following China, where Polestar models are now produced, the United States is the world’s second-largest global market for electric vehicles. Shorter delivery times for American clients are said to be among the advantages of US production, as is the reduced environmental impact of shipping automobiles around the world. Polestar argues that this will also allow the 3 to be provided at a competitive pricing point. The styling of the 3 is yet to be revealed.

The 2022 Polestar 3 will compete with the Jaguar I-Pace and Tesla Model X, with the SEA underpinnings expected to deliver competitive performance.

The higher 3 will place less emphasis on raw speed, but Polestar has indicated that it would prioritize aerodynamic efficiency, most likely in order to maximize range.
A Google-developed infotainment system, similar to the Polestar 2, and a range of “high-end, safety-focused automated driving technologies” are also included.
Polestar is likely to offer a separate Performance Pack for the 3, similar to the 2, which will include upgraded suspension and brakes. 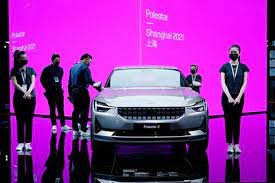 Are you excited about the launch of the 2022 Polestar 3? Comment down below