Ducati Panigale V2 To Be Launched In India Soon. Teased On Twitter Handle Of Ducati India.

The Ducati Panigale V2 was unveiled at EICMA 2019 and has been on sale in international markets for some time now. It seems that Ducati India is getting ready to launch the Panigale V2 after the lockdown is over. 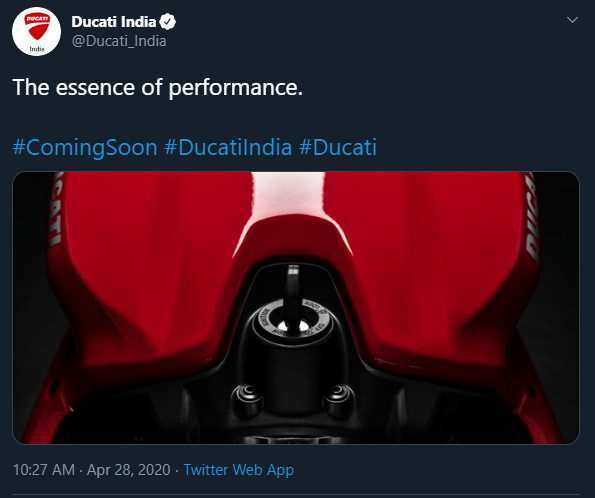 The Ducati Panigale V2 almost looks like a Panigale V4 clone but with some differences such as the slimmer body panel profile, a different chassis with a newly designed sub-frame and a short exhaust. The suspension bits are the same as the Panigale 959, with a few changes to the travel and a softer stock setting. The engine on the Ducati Panigale V2 has been carried over from the Panigale 959. It is the same 955 cc Superquadro engine, but it is now Euro 5/BS6 compliant and comes with an increase of 5 hp in power and it now produces 155 Hp of power and 104 Nm of torque. All of this is mated to a 6-Speed transmission with an Up and Down function quickshifter, which comes in as standard with the motorcycle. In the electronics department, it comes with a new six-axis IMU assisted electronic package. The package includes anti-wheelie, cornering ABS, engine brake control, three riding modes: Race, Sport and Street. All of this can be controlled using the menu found on the 4.3 inch TFT display.

We expect the Ducati Panigale V2 to be priced higher than the Panigale 959, as it comes with new features and and is now more powerful.